Posts from the ‘News’ Category

This market insight covers the Brazilian electrical vehicle (EV) and supporting infrastructure market. It focuses on pure EVs and recharge station infrastructure, presenting actual business models and new model propositions. Further, analysis takes into account Brazil’s fuel scenario as well as government regulations and incentives for EV use. Market dynamics are evaluated in terms of drivers and restraints. The service also covers EV market revenue, vehicle unit growth, and other important variables that will affect implementing EV infrastructure. Strategic conclusions emphasize the most important aspects of this market. The base year is 2012, and the forecast period is from 2013 to 2017.

“The BYD E6 is designed for taxi drivers. The more they drive, the more they will save. On the whole, a taxi driver will be able to earn an additional NT$10,000 (US$300) a month,” said Chen Wei-jen, president of BYD Taiwan.

Chen made his remarks during a press conference on Oct. 8 to introduce the E6 to Taiwan’s market. A total of 1,500 invoices from taxi drivers have been received as of now, although the vehicle will not be available in the market before the first quarter of next year.

Chen said that Taiwan Solar Energy would join the business because they believe electric vehicles will become more and more popular, as gas prices continue to rise. The E6 is already in use by taxi cabs in Shenzhen and Hong Kong and will be introduced to Singapore, London and the United States as well.

The vehicle was designed as a five-door hatchback sub-minivan. It only takes eight seconds to accelerate from 0-100 miles, with a top speed of 140km per hour and a driving range of 300km when the battery is fully charged.

Chen said that it only takes two hours to fully recharge the battery but approximately 80% of the battery life will be restored within 40 minutes. The E6’s battery has a 10-year warranty, he said.

The Hybrid and Electric Vehicle Report

Although today electric vehicle (EV) technology is attracting significant attention and investment, it is certainly not a new sector but the resurgence of one that enjoyed considerable popularity during the latter years of the 19th century and the first decade or two of the 20th. Indeed, before the meteoric rise of the internal combustion engine (ICE) it was electric and steam propulsion that competed for dominance in the motorised transportation sector.

However, the ICE had distinct advantages over the other two technologies, particularly with respect to operating range and convenience: the electric vehicle’s batteries frequently required time-consuming recharging and the steam vehicle could not be used before a lengthy warm-up period, and its range was limited by the quantity of water that it could carry. The abundance of cheap oil, the advent of the mass-production assembly line and the development of the self-starter then assured the ICE’s advance as the dominant propulsion technology.

This report focuses primarily on vehicles that rely solely on electric propulsion, and also includes a review of ‘range-extended’ electric vehicles (REEV) that carry an internal combustion engine (ICE) and generator set that is capable of recharging the batteries to enable travel beyond the electric range available from batteries alone. REEVs are predominantly series hybrid vehicles on which the ICE cannot directly power the driving wheels and which feature significant battery capacity.

In a recent interview with IHS SupplierBusiness, Ernie DeVincent, VP Product Development for Getrag commented: “I think it is absolutely inevitable that the penetration of hybrids is going to have to increase. And this will put a great deal of pressure on the economic side of hybrids, particularly battery costs. Because nobody will meet 54 miles per gallon in the US without a substantially higher mix of hybrids than they have today. So hybridisation is going to be a major factor and this puts a lot of pressure on economics”.

Hybrid vehicles, although not yet attaining very significant market share, are nevertheless a necessary and growing part of the future powertrain mix. Furthermore, hybridisation has more than just fuel efficiency to contribute in performance terms. The inclusion of hybrid components can deliver desirable customer features such as improved cabin features and HVAC, enhanced launch performance to overcome the weaknesses inherent in downsized engines, high boost turbocharging and optimised transmissions as well as limited electrically driven four-wheel drive (4WD) solutions. Therefore, despite the key aspect of fuel economy improvement, additional value can be delivered to the customer through other technologies associated with hybridisation.

This report looks at the Hybrid and Plug-in Hybrid Light Vehicle sector, which looks at the market drivers, current hybrid architectures and technologies, developing business models and challenges.

Car batteries are heavy and clumsy, right? Along with research partners, Volvo has developed a concept to integrate the batteries into the car structure. With innovative materials and form factors, the batteries would claim much less space. Further down the road, the concept could significantly reduce the weight of future electric vehicles.

Volvo’s new energy storage systems consist of carbon fibres, nano structured batteries and supercapacitors. The project team identified a feasible alternative to the heavy weight, large size and high costs associated with the batteries seen in hybrids and electric cars today, whilst maintaining the efficient capacity of power and performance. The answer was found in the combination of carbon fibres and a polymer resin, creating an advanced nanomaterial, and structural super capacitors. The reinforced carbon fibres sandwich and the new battery are moulded and formed to fit around the car’s frame, such as the door panels, the boot lid and wheel bowl, releasing the space normally occupied by the batteries in the floor structure of the car or in the trunk. The carbon fibre laminate is first layered, shaped and then cured in an oven to set and harden. The super capacitors are integrated within the component skin. This material can then be used around the vehicle, replacing existing components, to store and charge energy.

The material is recharged and energised by the use of brake energy regeneration in the car or by plugging into a mains electrical grid. It then transfers the energy to the electric motor which is discharged as it is used around the car.

But it is not only the form factor that gives this concept an edge over conventional lithium-ion batteries. The new material also charges and stores faster than conventional batteries. And it is also strong and pliant.

Today, Volvo has evaluated the technology by creating two components for testing and development. These are a boot lid and a plenum cover, tested within the Volvo S80.

The boot lid is a functioning electrically powered storage component and has the potential to replace the standard batteries seen in today’s cars. Though it contains a battery, it is lighter than a standard boot lid, saving on both volume and weight.

The new plenum demonstrates that it can also replace both the rally bar, a strong structural piece that stabilises the car in the front, and the start-stop battery. This saves more than 50% in weight and is powerful enough to supply energy to the car’s 12 Volt system

It is believed that the complete substitution of an electric car’s existing components with the new material could cut the overall weight by more than 15%. This is not only cost effective but would also have improvements to the impact on the environment.

Volvo was the only car manufacturer in the project which took place over 3.5 years.

Renault Samsung Motors announced on October 4 that it will push forward with a plan to sell its SM3 ZE in Changwon City after Jeju Island.

In September, the automaker built an A/S Network, and installed AC electrical vehicle chargers in the Changwon division. In addition, it already secured sales bases.

Changwon City plans to conduct its campaign for electric vehicles so that 300 units can be sold by 2015. It will move forward with a plan to help government officials buy 20 units and citizens 30 on a trial basis this year.

In Changwon, the price of an electric car is similar to that of a gasoline car in the same league, because buyers can receive a subsidy from the Ministry of Environment worth 15 million won (US$14,015), and another one from Gyeongsang South Province and Changwon City valued at 6 million won (US$5,604). In addition, people can get tax benefits for electric cars.

The city is scheduled to accept applications for electric vehicle benefits from October 7 to 16, and to select recipients on October 21.

Chrysler is currently looking to recruit new engineers to work on the development of battery management systems. These systems are used in electric vehicles to oversee the performance and manage the capabilities of lithium-ion batteries. The recruiting endeavor is part of Chrysler’s overarching electric vehicle program. In the past, the automaker had claimed that this program would produce a wide range of clean vehicles that would fall under many of its popular brands. The program was expected to produce all-electric vehicles as well as plug-in hybrids.

Electric Vehicles Speeding Toward 7% Of All Global Sales By 2020

Electric Vehicles Speeding Toward 7% Of All Global Sales By 2020.

Hybrid vehicles may have had pole position so far in the race to a sustainable transportation future, but electric-only vehicles are about to pull even – and they’re both becoming a significant part of global vehicle sales. 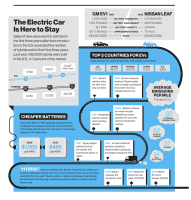 Palo Alto is an ideal place for electric vehicles when it’s full of wealthy, tech-savvy executives. It only makes sense, then, that the city council has voted in favor of a proposal requiring that new homes include wiring for speedy Level 2 EV chargers. The mandate should add less than $200 to a home’s price, and could represent a bargain for future residents — they’d have to pay four times more for a retrofit, Mayor Greg Scharff says. Established locals may also catch a break, as the council wants to simplify the process of getting an EV charger permit. The moves aren’t very bold — many in the area could buy a Model S with spare change — but they may start a trend that spreads to less affluent regions.

As acquisitions go, Ford Motor’s purchase of Michigan start-up Livio doesn’t amount to even a tiny drop in the bucket. Still, it has the potential to  create ripples throughout the industry.

Ford paid less than $10 million — not even 0.2 percent  of its 2012 net profit — to acquire the Ferndale, Mich.-based company whose software connects the apps on your smartphone to your car’s dashboard. Ford said the move will extend its leadership in the race to provide drivers with safe, seamless access to the electronic content they love while in their vehicles.

More importantly, however, the two companies plan to focus on developing an industry standard for smartphone-to-vehicle communications, a market that is expected to reach 21 million vehicles by 2018. The revenue potential is enormous, but the problem is that every automaker wants its own branded solution. That makes it tough for app developers, especially smaller ones, to play in the automotive market. A single vehicle interface standard would let developers write software faster and more efficiently, providing customers the apps they want to use more quickly. Livio software already is compatible with several commonly used apps and works with all major smartphone devices.

“At Livio, our philosophy is centered on bringing customers more connectivity with less hassle,” said Livio CEO Jake Sigal in a press releases. “We believe this partnership is an excellent match, as it will give us the ability to work with Ford to provide customers even more access to new technologies in the vehicle infotainment space.”

Livio, co-founded by Sigal and Massimo Baldini, will be a wholly owned subsidiary of Ford Global Technologies and will function as a separate department . The deal gives Ford access to a broad group of application developers, while enabling Livio to maintain its independent and entrepreneurial approach.

“Ford is acquiring Livio to advance connectivity for our customers and to lead the way in in-vehicle connectivity for the entire automotive industry,” said Bill Coughlin, president and CEO, Ford Global Technologies.